World Punjabi Organization (WPO) is an international body of Punjabis to bring about “Punjabi Renaissance”. It is a non-political body of prominent Punjabi industrialists, businessmen, sportspersons, journalists, artists and achievers in other fields from all over the globe. It was formally launched on 10th January 1998 by Shri I.K. Gujral, the then Prime Minister of India. It is actively engaged in promoting Punjabi brotherhood, folk & culture to foster social, economic and cultural bonding among Punjabis staying in over hundred countries of the world. WPO has undertaken many projects for the above causes. 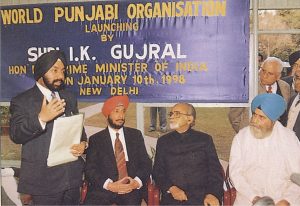 Important activities organized by WPO over the years in various fields are highlighted hereinafter: