New Delhi April 13, 2016: Padma Shri Vikramjit S. Sahney, International President, World Punjabi Organisation (WPO), urged Mr. David Cameron to make a formal apology for the Jallianwala Bagh massacre by General Dyer while welcoming the announcement made by  Mr.  Justin Trudeau, Hon’ble Prime Minister of Canada that he will make a formal apology next month in the House of Commons for the Komagata Maru incident. On the occasion of baisakhi celebrations by WPO, Mr. Sahney also announced that the World Punjabi Parliamentarian Forum will be meeting towards end of this year and discuss opportunities ranging from education, youth, health & human rights for Punjabis in their respective countries for an all inclusive growth. He also exalted that all efforts will be made towards ‘Save the Girl Child – Beti Bachao, Beti Padao’ & ‘Drug Abuse’ by eradicating these twin social menace.

Mr. Sahney highlighted the various meaningful contributions of the Punjabis towards the society.  He said that our society stands for Peaceful co-existance, prosperity and strength.

The occasion was the celebration of Baisakhi, annual gala event of WPO that was celebrated with a spectacular enthusiasm at Siri Fort Auditorium, New Delhi.  Lovers of Punjabi sufi & folk music were in for a real treat as they were left completely mesmerised by the musical brilliance of performance by Gurdas Mann.  The atmosphere was completely charged with the presentation of lovely bouquet of songs from Mann from different genre, that included, amongst others – Challa, Mamla Gadbad Hai, that had everyone joining in with nostalgia.

Bhangra and Gidda, accompanied by Dhol, set the energetic feet of the audience spontaneously in motion throughout the evening.  Several people were dressed in shades of yellow and the ambiance was also prepared aesthetically in sync with the festival and the freshness it symbolizes.

WPO which is a non-political body of Punjabis and has been in the forefront in carrying out multifarious activities with greater objective of promoting brotherhood, goodwill, peace and harmony celebrates Baisakhi as its one of the signature events.  In addition to its enormous religious significance as a landmark event in Sikh history, Baisakhi is an ancient harvest festival which marks the beginning of a new solar year and harvest season. Sikhism is the fifth largest faith in the world. Baisakhi is one of the most joyous and colorful festivals of India and is gradually becoming a major global cultural celebration. 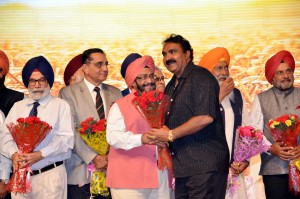