WPO TO STAGE SARBANSDANI ACROSS THE WORLD

” This mega light and sound show produced by World Punjabi Organisation in collabaration with Punjab Art Theatre on life and supreme sacrifices of Shri Guru Gobind Singh will travel in various parts of india including mumbai in january and in other parts if world like london, birmingham, toronto, newyork, vancouver” said Vikramjit singh sahney international president of WPO

The two hour show with live theatre & videos and shabads sung by famous ragis and singers is a panoroma on sikh history especially from period to martyrdom of Shri Guru Teg Bahadur to birth of Khalsa, sacrifices of four sahibzadas, zafarnama and advent of warior banda singh bahadur .

Audience was held spell bound and was sentimental in witnessing  great saga of history.

Earlier also WPO had produced shows like Bole So Nihal on tercentary if khalsa…Guru Maneo Granth and Sher-e-Punjab Maharaja Ranjit Singh and was instrumental in putting up an equestrian statue of sher-e Punjab inside parliament house. 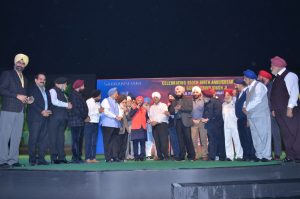